The muscadine grape (Vitis rotundifolia Michx) was one of the most pleasant surprises found by the early colonists that settled in the southeastern portion of the United States. Many names including bullace, bullis, bullet and muscadine have been used to denote this grape in the wild and in cultivation. 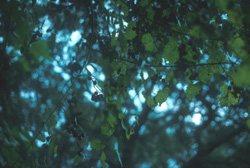 Photo 1.1: Wild muscadines are an important wildlife food and often climb to the tree tops.

Cultivated grapes of this species are now usually called muscadines although the bronze muscadines are often referred to as scuppernongs. Muscadine, however, is the recognized common name since ‘Scuppernong’ is actually a cultivar of bronze muscadine found growing wild on the Scuppernong River in North Carolina about 1810. Other popular bronze cultivars in Georgia include ‘Fry’, ‘Carlos’, and ‘Summit’. 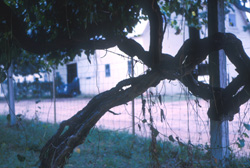 Muscadine vines may live to be enormously old in some situations. Breeding programs have resulted in all of the improved fresh market cultivars planted commercially today. With these cultivars, yields of three to four tons per acre can be expected by growers who apply all the recommended cultural practices including irrigation. Whole sale prices received for high quality, large fruited fresh market types have been good early in the season (early August), but fair to poor in mid-season (late August and Sept.). South Georgia begins harvest in early August and North Georgia about three weeks later. For this reason, the wholesale market for muscadine table grapes in North Georgia does not look very attractive at this time. Prices usually strengthen in late season (Oct.-Nov.), but the primary late season cultivar, Granny Val, is not well adapted to North Georgia.

Yields for mature wine and processing cultivars of muscadines are typically in the five ton per acre range. Young mature vines sometimes yield as high as eight to ten tons per acre. Wholesale prices for wine and processing cultivars is currently about $400 per ton. With a typical yield of five tons per acre, profit margins at $400 per ton are tight. If higher yields or higher prices can be realized, profit potential is much greater. Value added enterprises such as wineries may have potential in some areas with heavy traffic flow and tourist traffic.

Section 2: Costs and Returns from Muscadines