Although training varies with the type of trellis you use, the first step is the same for both trellis systems. After planting, prune the vines to a single cane. If the plants have a modest root system cut the cane back so only two to four buds are left, then follow the steps for the type of trellis you are using. If the root system is very good, a single long cane can be left to form the trunk. Only let the top bud on the long cane grow. Pinch off any side shoots, but leave the first leaf of the side shoot to help nourish the vine.

One-Wire Trellis: Tie a piece of durable string such as binder’s twine to a stake driven beside the plant. Then tie the twine to the overhead wire using a “Y” shape or a “U” shaped piece of wire attached to the trellis. The “Y” or “U” shape at the top is to guide the two cordons on to the wire. It should be taut enough so that as the new shoot grows, it can be twined around the string to form a straight trunk for the plant. Vines planted near the post can be trained to a string tied to the head of a long nail and the trellis wire. The nail is driven into the post about 1″ deep near ground level. Long tomato or bamboo stakes can also be used and the vine fastened to the stake with cloth or plastic tying ribbon which can be purchased from horticulture suppliers. An economical hand operated machine called a “Max Tapener” is available which dispenses the plastic ribbon, cuts and staples it together in one motion. 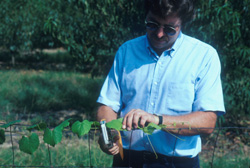 Each plant will produce three or four shoots when growth begins in the spring. When the strongest shoot is about six inches long, train it to the string. Remove all other shoots. As the shoot grows, periodically wrap the new growth around the twine. While you are training the main shoot, pinch off side shoots of the young trunk . Do not, however, remove the leaves from the trunk. These will help nourish the vine.Removal of side shoots must be done frequently during the first two growing seasons.Be sure your laborers understand the growing point should not be prematurely pinched. When the young trunk in near the trellis wire, pinch it off about six inches below the trellis wire except in the multiple trunk training method. Allow the top two buds to develop into the cordons (permanent arms) of the vine. 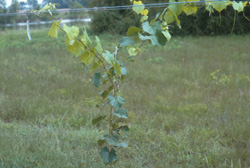 Note how in this case the grower used a “U” shaped piece of wire with a string attached. After the plant has attached itself to the trellis wire loosely wrap and tie the cordon on as needed. Loose wrapping will help the cordon hold on the wire better than if supported by tendrils alone. To encourage the cordon to grown down the wire, it is important that developing side shoots be pinched off at when they are 8-10 inches in length. Permanent arms of adjacent plants should be tip to tip and not allowed to overlap after the winter pruning. 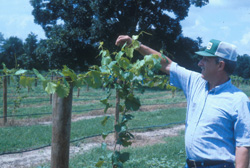 Photo 17. 3: Tipping side shoots on young vines at 10 inches to encourage the vine to grow down the cordon wire.

To train muscadines, drive a four inch nail one inch into the line post two feet below where the cross arms are affixed to the post. Then tie nylon or new binder’s twine to a stake driven beside the new plant or a nail near ground level.

When the young trunk is two feet from the trellis wire, pinch out the terminal. Then tie twine from each trellis wire to the nail. Allow two shoots to develop at the top of the trunk and train one to each of the strings. When the two shoots reach the trellis wires, pinch their terminals just below the wires. Then allow the top two buds on each shoot to develop into the permanent cordons (arms) of the vine. Once the cordons become attached to the trellis wires, remove all twine to avoid girdling.To encourage the shoot to grow down the wire, it is important that developing side shoots be pinched off at 8-10 inches. Periodically, tie and loosely wrap the young cordons to the trellis wire as they grow.Loosely tying and wrapping is preferred to allow for annual trellis maintenance and wire tightening without pulling the vines out of their position.When each of the four shoots fill their area, pinch out the terminals. This training will result in individual vines with 28-40feet of bearing arms depending upon plant spacing in the row. Cordons of adjacent plants should be tip to tip.