Annual pruning of muscadines is a must if the vineyard is to be kept at its optimum production level. Unpruned vineyards may bear alternately, are nearly impossible to harvest, and are also more vulnerable to pest attacks because of reduced spray coverage and poor air movement within the canopy. 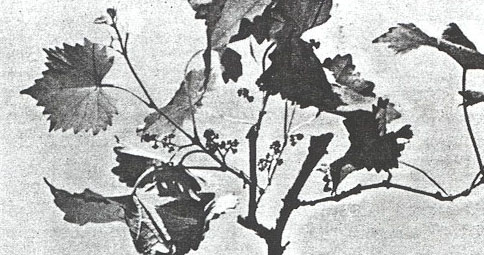 Figure 12. Muscadine flowers are borne on new shoots which arise from buds coming out of last year’s growth. The mature shoots that carry the buds for next season’s crop are referred to as canes. Canes that are shortened by pruning to 3-4 buds are called spurs.

The basic muscadine plant consists of a trunk and cordons (arms on the wire). On the cordons, fruiting units called spurs are developed (Figure 13). During the dormant season, cut back all shoot growth of the previous summer to spurs with two to four buds (about two to four inches long in most cases). An average of three buds per spur is desirable. Entirely remove canes that are not needed for spurs. If practical remove old fruit stems as they are a source of the ripe rot fungal spores.

On young and fairly young vines, spurs should be spaced four to six inches apart on the cordons. As the vine gets older, each spur becomes a spur cluster. It may become necessary to thin the spur clusters in as few as three years.   This thinning may be done by entirely removing every third or fourth spur cluster, or a part of all of the spur clusters. 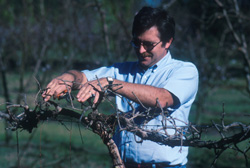 If spur clusters are removed, over a period of years the remaining spur clusters can gradually be thinned to about 12 inches apart. Experience has shown that gradual thinning each year after the third bearing season may be preferable to waiting four or five year before spurs are thinned. The first spur thinning should be on spurs which are pointed downward and under the cordon. These are the spurs in the poorest position to produce high quality fruit.

All wood arising from the trunk should be removed. This helps maintain vigor at the end of the cordons.

When pruning, it is important to inspect the cordons. If a cordon becomes weak or diseased, remove part or all of it as needed and train a shoot to take its place. Always be on the lookout for tendrils that have wrapped around the cordons. Unless they are removed, they may eventually girdle the cordon. 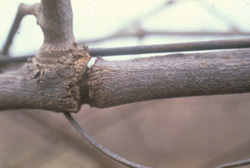 Photo 13.1: Cordon where a girdling tendril was removed.

Growers should delay pruning as late as possible in the winter. Do not prune the vines from late November through mid-January if possible. Pruning done at this time has resulted in considerable winter injury and vine death. Although late pruning results in heavy bleeding, there is little evidence that bleeding is harmful. Growers who have more vines than can be pruned between mid-January and early March should start earlier and prune their least desirable or most cold hardy cultivars first.

Mechanical pruning with a sickle bar type cutter is recommended for growers who have enough acreage to justify the cost of equipment. Research has been conducted in North Carolina to determine the best pruning configuration for processing muscadine cultivars. In this study the best mechanical pruning configuration (looking down the cordon) was an eight inch by eight inch square with the cordon in the center. If the long cane pruning system is used the first year (initial long cane pruning system), be careful not to mechanically prune back into wood two or three years old.

This wood will not produce grapes. Touch up hand pruning is still needed for thinning overcrowded spurs, removing tendrils stangling the cordon, etc.

Photo 13.2: To secure old cordons to the trellis, several types of commercial grape “ties” are available. Note that only one, not two cordon should be attached to the wire..