Fertilization should be based on a soil test.However, if a soil test is not available follow these general recommendations.For the first growing season apply one ounces of premium grade 10-10-10 fertilizer or its equivalent per vine starting after growth begins in the spring and repeated at four to six week intervals if at least four inches of rain or overhead irrigation have been received since the last fertilization. Apply the fertilizer fairly evenly in a circle 18″ in diameter with the vine in the center. Reduce the rate or frequency of fertilizations if your see any fertilizer burn. The total number of fertilizer applications for the year will probably be four to five in south Georgia and three to four in north Georgia. Do not fertilize the vines after late August in south Georgia and late July in North Georgia.Slow release nursery fertilizers also give good results with fewer fertilizer applications. Follow the manufacturers directions on the bag.

During the second year timing and method of applications should be similar to the year before. However, the rate should be doubled to four ounces of premium grade 10-10-10 or its equivalent and the diameter of the broadcast circle should be increased to three and one half to four feet.

To fertilize an established vineyard, muscadines usually need about 50 pounds of nitrogen applied near bud break followed by about 30 pounds of nitrogen per acre after fruit set. Phosphorus and potassium should be applied according to the soil test. If a soil test is not available apply 3 to 4 pounds of premium grade 10-10-10 fertilizer or its equivalent per plant near bud break. Then apply ½ pound of ammonium nitrate fertilizer per plant or its equivalent after fruit set. On heavy or rich soils only a single application of nitrogen may be needed. The desired amount of vegetative growth per year is about three feet. If growth exceeds four feet, reducing the amount of nitrogen applied in future years may be advisable.

Fertigation (injection of fertilizer into the drip irrigation system) can be used with excellent results by the astute grower. It may be possible to bring the vines into full production one year earlier with fertigation. If you are interested in fertigation, contact your Extension engineers and horticulturist via your local county Extension office.

Soil pH should be checked every two to three years to determine if lime is needed. If lime is necessary, it is important to use the dolomitic form since grapes have a high requirement for magnesium.

Magnesium deficiency, which shows up later in the season, is of concern to muscadine producers since in severe cases the fruit may shatter prematurely. Symptoms are a yellowing between the veins of older leaves. The yellowing progresses up the shoots as the leaves grow older. 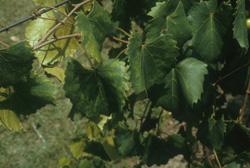 Photo: 21.1 Magnesium deficiency of muscadine showing yellowing between the veins.

Occasionally, it is necessary to apply boron in some vineyards to realize maximum yields, since boron deficiency can cause poor fruit set. If a boron shortage is confirmed by a leaf analysis test, apply five pounds of borax (10% boron) per acre to the soil surface or spray the vines with one pound of Solubor (20% boron) per acre just before bloom. Do not exceed boron recommendations. Excessive boron will injure or kill the plants.