Irrigation of muscadines is very important in the survival of newly transplanted vines in dry years, rapid growth of young vines, fruit sizing during dry years, and reduction in alternate bearing. Information on muscadine irrigation is very limited, but estimates of muscadine irrigation rates can be made. Most muscadine growers prefer to use drip irrigation, since the initial cost of installation is lower than overhead and the vines can be irrigated without wetting the foliage and fruit.Consult your local county Extension office and irrigation supplier to obtain information on how to install a drip irrigation system. The drip irrigation tubing can be run on the soil surface or suspended on a wire about 12 inches off the ground.  Anchoring the tubing around the posts at the ends of the row is recommended to prevent expansion and contraction of the drip tubing during cold and hot weather. Suspending the irrigation tubing on a wire reduces the chance of rodents chewing on the tubing and also allows the grower to easily monitor the rate of dripping from the emitters.Emitters which have clogged up or partial clogged up can be easily located.

Growers should test emitters for output when they are initially installed and at least once per year thereafter. Do not rely solely on manufacturer specifications for output calculations. Emitter quality and durability varies greatly. All emitters do not have to be tested, but a random sampling of a few emitters should be tested. Testing output is as simple as catching water from emitters for a specified amount of time, and then calculating the volume of output. When running a test, make sure the irrigation line is fully charged (let it operate for 10 to 15 minutes) before you begin to catch water. These simple tests can provide you with great confidence as you calculate water usage on a per acre basis.

Most growers initially install one, 1 gallon drip emitter per plant, in the center of the row about two to three feet from the trunk of the vine. During the first year, attach”spaghetti” tubing to each emitter to route the water to the planting hole.After the first year the spaghetti tubing can be removed.When the vines are three years old, a second drip emitter should be installed on the opposite side of the vine trunk. Drip irrigation systems should be operated regularly (even daily) during dry weather to replace water lost by evaporation and plant use.Drip irrigation only wets a small area of soil, and you cannot expect to store large quantities (i.e., 3 or 4 days supply) of water in the soil using drip irrigation. Recent research at the Georgia Station has shown that 6 to 8 gallons of water per vine per day gives maximum yield response to single trellised vines more than four years old. At a planting density of 181 plants per acre (a common plant density), this would require a total water supply (well capacity) of 1500 gallons per acre per day on mature vines during hot weather.

A general rule of thumb for irrigation capacity of your well would be about 1 acre of muscadines per day for each gallon per minute output of the well.Thus, a well with a 10 gallon per minute output (600 gallons per hour; 14,400 gallons per 24 hr period) could irrigate about 10 acres of muscadines over a 24 hr period with irrigation zoning during peak water demand periods.The system should be operated daily unless 0.25 inches of rain falls.In general, you can keep your system off 1 day for each 0.25 inches of rain received, up to about 2 inches of rain total.

Sprinkler irrigation is sometimes used on muscadines. Its usage is less desirable as it can lead to prolonged periods of wetted foliage, which can promote disease problems. Also, the efficiency of water usage is much less for overhead sprinklers since a significant fraction of the water is lost to the atmosphere by evaporation during application. If sprinkler irrigation is used, expect to apply 1 to 2 inches of water per week during the heat of the summer. It would be best to split applications of water (apply 0.75 to 1 inches twice a week) in order to utilize rainfall more efficiently. Pan evaporation estimates given on television weather reports or in newspapers can be used to guide irrigation application amounts. For example, during the heat of the summer, pan evaporation amounts of 0.3 inches per day are common. If the plant utilization rate is 75% of pan evaporation, or 0.22 per day, then, without rainfall, 1 inch of sprinkler irrigation would need to be applied every 5 days under hot conditions. Tensiometers or resistance blocks may be used to measure soil moisture and help determine when to irrigate.

After harvest, greatly reduce the amount of irrigation water applied from drip or sprinkler systems. Apply only enough water to keep vines healthy and maintain the foliage. For drip irrigation, this could mean running the system every third day. For overhead irrigation, apply a maximum of 1 inch of water per week. In October, discontinue irrigation in order to allow the vines to harden off in preparation for winter. 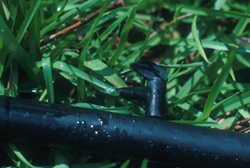 Photo 22.1: Drip irrigation emitter which puts out one gallon per hour. 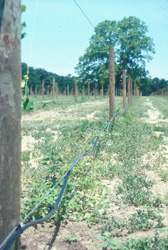 Photo 22. 2: Drip system suspended on a lower wire. This makes maintenance and observation of the system much easier. 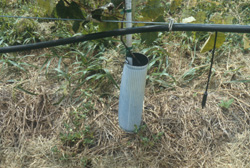 Photo 22.3: Suspended microsprinkler system in kiwi vineyard. This is a hybrid between drip and overhead sprinklers. It can be run less often than drip, because a larger volume of soil is wetted. 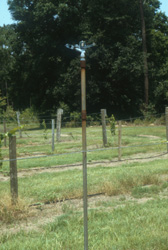 Photo 22.4: Overhead irrigation is excellent with regard to supplying water to the vineyard, but has the disadvantage of washing off pesticides.