Black rot, caused by the fungus Guignardia bidwellii, is the most destructive disease of bunch grapes in Georgia. It may be developing into a problem on some muscadine grape cultivars. The black rot fungus overwinters on infected canes and leaves. In the early spring, the fungus infects new growth as soon as it appears. The disease continues to spread throughout the vine attacking the rapidly growing immature plant parts including fruit, tendrils, leaves and canes. Fruit infection can occur at any time before maturity, but most infection is thought to occur before the fruit is half grown. The signs of fruit infection are dry, black, scabby spots (Figure 15). On very susceptible cultivars, these spots may become large and crack open. Black rot does not cause a decay of mature berries, but infection of immature berries may cause mummification and drop.

Leaf infections (Figure 16) appear as tiny, reddish-brown spots on the upper surface. The spots enlarge to one-fourth inch or more in diameter and turn dark brown. A ring of black fungus spore producing structures develops near the edge of the brown area. 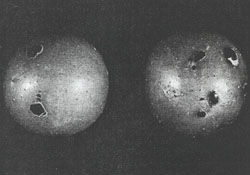 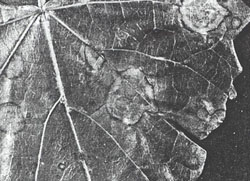 Bitter rot, caused by the fungus Greeneria uvicola is common in most muscadine vineyards. It overwinters on stem lesions and mummified berries. This disease primarily damages fruit. However, it can infect leaves, tendrils and stems. The fruit becomes most susceptible as it approaches maturity. Symptoms on mature fruit (Figure 17) first appear as somewhat bleached or whitened water soaked spots. The fungus spreads through the entire berry causing a soft rot. Black fungus spore producing structures develop on the rotted areas. Finally, the decayed berries, now nearly covered with the fungus fruiting structures, shrivel into dry, dark colored mummies. The mummy caused by bitter rot and ripe rot (see below) consists of the dry shriveled fruit skin covered with fungus fruiting bodies, the internal fruit flesh having been consumed by the fungus. 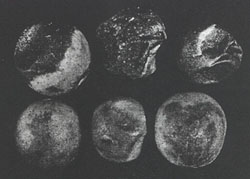 Figure 17. Bitter rot on fruit of muscadine grape. There is usually a somewhat bleached band between the black bumpy fungus-covered area and tissue not yet rotted.

Ripe rot, caused by the fungus Glomerella cingulata, has become one of the two (the other being Macrophoma rot) most important diseases of muscadine grapes in Georgia. The cultivar `Fry’ which is currently the major cultivar for the commercial fresh market, is especially susceptible to severe losses from ripe rot. This disease appears suddenly and spreads rapidly. Ripe rot (Figure ) attacks the fruit as it ripens. Fungus spore producing bodies form on the surface of the decayed berries, giving the bronze cultivars a reddish color. They release large quantities of pinkish to rusty red colored spores during rain or other wetness (Figure 18). This pink to rusty red appearance of the diseased fruit is unique to ripe rot. As the berries become completely decayed, they shrivel to mummies. The disease is carried into the next season in mummified fruit and infected fruit stems retained on the vine. 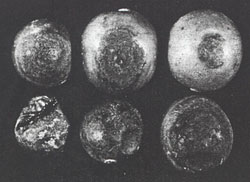 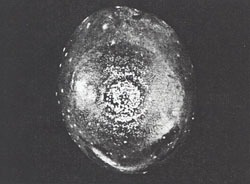 Figure 19. Ripe rot on a red skinned variety is often difficult to see unless the pink to orange fungus spores are produced.

Macrophoma rot, caused by the fungus Botryosphaeria dothidea, is the other major disease of muscadine grapes in Georgia. It overwinters on the remains of infected berries. The causal fungus is very widespread and can be commonly found on many cultivated and wild woody plants. This disease can cause severe crop losses on `Fry’ and other susceptible cultivars.

Macrophoma rot (Figure 20) begins as a small tan to dark brown spot which may have some fungus spore producing structures in the center. Soon a water-soaked, light brown soft rot spreads out of the spots and consumes the entire berry. Like ripe rot, Macrophoma rot attacks the fruit as it ripens. It appears suddenly and increases rapidly during the ripening period. 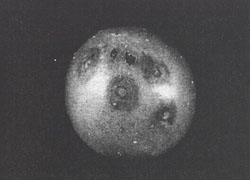 Powdery mildew is caused by the fungus Uncinulanecator. The damage on muscadine grapes is largely confined to the fruit. Shortly after bloom, affected berries will show a white to gray powdery or dusty growth on the surface. These berries become russetted and may crack open. Some berry drop or reduction in berry size at harvest may also occur. Powdery mildew seldom damages muscadine grape foliage. The cultivar `Magnolia’ is very susceptible to powdery mildew.

Angular leafspot, caused by the fungus Mycosphaerella angulata, only attacks the leaves and causes premature loss of foliage. Symptoms (Figure 21) first appears as faded angular spots on the leaves. The spots quickly darken to brown and may be surrounded by a distinct halo. The cultivar Magnolia is very susceptible. No cultivars are particularly resistant. Leaf loss due to angular leafspot can result in poor fruit quality. 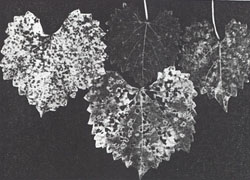