Pierce’s Disease (PD) is a serious threat to the cultivation of grapes in the United States, especially in the warmer southern regions. Recently the UC Davis grape breeding program has developed new European (Vitis vinifera) grape selections with resistance to PD that are expected to produce high quality yield in regions with PD pressure where the Vitis vinifera production was previously not a viable option. On-going research at Auburn University focuses on investigations to determine the development and production potential of three PD resistant 87.5% V. vinifera selections from the UC Davis program that were planted at the Chilton Research and Extension Center in Clanton in 2010.  Our results are very promising and indicate the newly developed PD resistant European grape progeny have the potential to greatly impact the fruit industry in Alabama and the Southeast by providing new specialty fruit crop to the market and broaden the window of economic opportunities especially for small- and medium-size family farms. As a consequence of our research outcomes, two commercial vineyards in Alabama were granted the license to grow up to 2,000 vines from each of these three selections. These inspiring results encouraged us to acquire and explore a new PD resistant grape accession with enhanced European grape parentage. 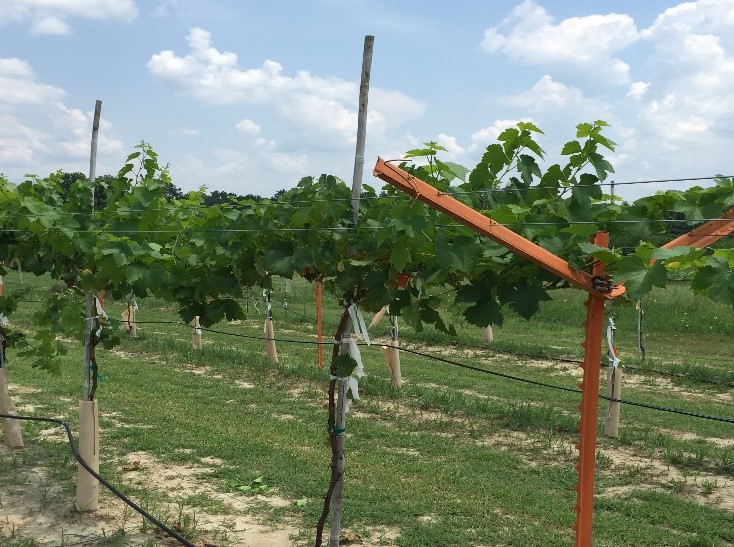 Building on our previous experience, we have expanded the research plot to include a next generation PD resistant 94% European grape from UC Davis named ‘502-20’ (Fig. 1). The goal of the study is to determine the feasibility of growing 94% Vitis vinifera grapes in Alabama and evaluate the vine production potential when trained to a highly efficient Watson training system. Knowledge gained through this project will aid in development of best management practices and production system recommendations, vital for the establishment of a sustainable modern grape industry in the Southeast.

Vines are planted in a replicated study at three planting distances of 6’, 7’, and 8’ in-row and at 12’ between rows to compare the total yield and fruit quality and to determine best suited planting distance for this variety. ‘Watson’ trellis system is a relatively new training structure that gains popularity in the southeastern viticulture. It features divided canopy training for better air movement and reduced risk of foliar disease development. 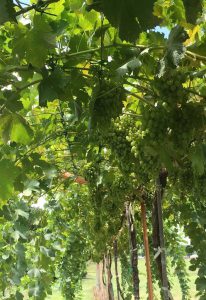 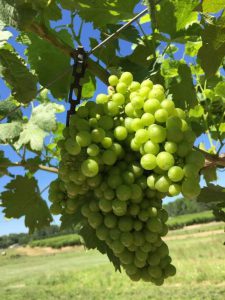 Observations are on-going to determine vine phenology, cropping potential, yield efficiency, and fruit quality at each planting distance. After trellising the vines during the first growing season, cluster production was observed during the second year of vine growth and development, but fruit clusters were removed before flowering in order to encourage root system establishment of the young vines.  Vines were dormant pruned in February to 12 spurs per vine (6 spurs/cordon) with two buds per spur retained for a total number of 24 buds per vine. Shoot thinning was conducted during spring to maintain the desirable shoot number. Additionally, cluster thinning was applied to adjust the crop load to one cluster per shoot. Our results indicate the vines produced a commercial crop during the current season (Fig. 2). Although statistical differences between the total yield/vine were not found among the three planting distances, the 6’ in row treatment produced the highest yield of 18.1 lb/vine.  Mean cluster weight varied between 320.0g for vines planted at 6’ X 12’ to 332.2g for vines planted at 7’ X 12’ (Figure 3). Number of clusters harvested per vine ranged from 20 for plants at 7’ X 12’ to 23 for vines at 8’ X 12’. Mean berry size for all planting distances was slightly above 2g with soluble solids content of 19-20%.

Yield and fruit quality results for the first commercial crop of 94% European grape suggest that cultivation of this high-value PD resistant vine can provide an excellent opportunity for the development of value-added products and can contribute to sustain rural communities in the Southeast by creating economic conditions for new employment and new businesses, while boosting existing industries such as the local agritourism.